Ye are the light of the world. A city that is set on an hill cannot be hid.
Matthew 5:14 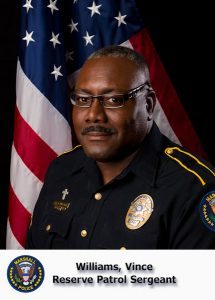 Marshall Chief of Police Jesus “Eddie” Campa has named Sergeant Vince Williams as this week’s MVP. Sgt. Williams, a reserve officer for the Marshall Police Department, has continuously shown his dedication to not only the department, but also to Marshall residents for more than a decade. His latest act of going above and beyond the call of duty occurred on Nov. 9 when MPD received a call about a robbery in progress at the Tobacco Patch located in the 400 block of East Pinecrest. Sgt. Williams, who had completed his shift, had transferred all of his equipment from his patrol unit to his personal vehicle and was preparing to go home when he heard the robbery call. Rather than leaving and going home, Sgt. Williams gathered his necessary equipment and responded to the robbery, where he assisted other officers and remained on the scene until his assignment was complete.

Chief Campa stated, “Sgt. Williams volunteers his own time on a weekly basis to serve our community and asks for nothing in return. This type of selflessness and dedication makes Sgt. Williams a true unsung hero to our community. It is with great honor that I name Sergeant Vince Williams this week’s MVP.” This year, Sgt. Williams was also honored with the Merit Award for a Reserve Law Enforcement Officer.