He that covereth a transgression seeketh love; but he that repeateth a matter separateth very friends.
Proverbs 17:9

Haller, the Mavs’ starting catcher the past two seasons who will lead Marshall again next spring during his senior season, was joined by family, friends, coaches, administrators and media during the ceremony to officially sign with the Aggies. He had been verbally committed to A&M since the summer of 2015.

Haller is also a standout football player with the Mavs, having become Marshall’s all-time leader in touchdowns this season. He signed his baseball letter-of-intent just two days before he and his teammates face Wylie East in a bi-district playoff game Friday night in McKinney.

But as dominant and impressive as Haller has been on the football field, his true love has always been baseball. Since his freshman year with the Mavs under head coach Derek Dunaway, Haller has been named to three straight All-District teams including being named the District 14-4A Freshman of the Year in 2014. He was the 15-5A District Sophomore of the Year in 2015, and was second-team All-District last season as a junior. 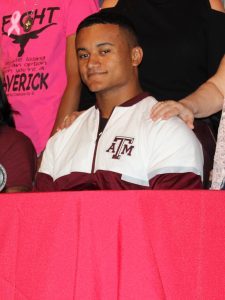 For his career, Haller is hitting .376 with nine home runs and 51 RBI in his three seasons with the Mavs. He has 19 doubles and four triples during that span.

He will join an Aggie program that went 49-16 last season and advanced to the NCAA Super Regionals. Texas A&M finished second in the SEC West Division last spring.