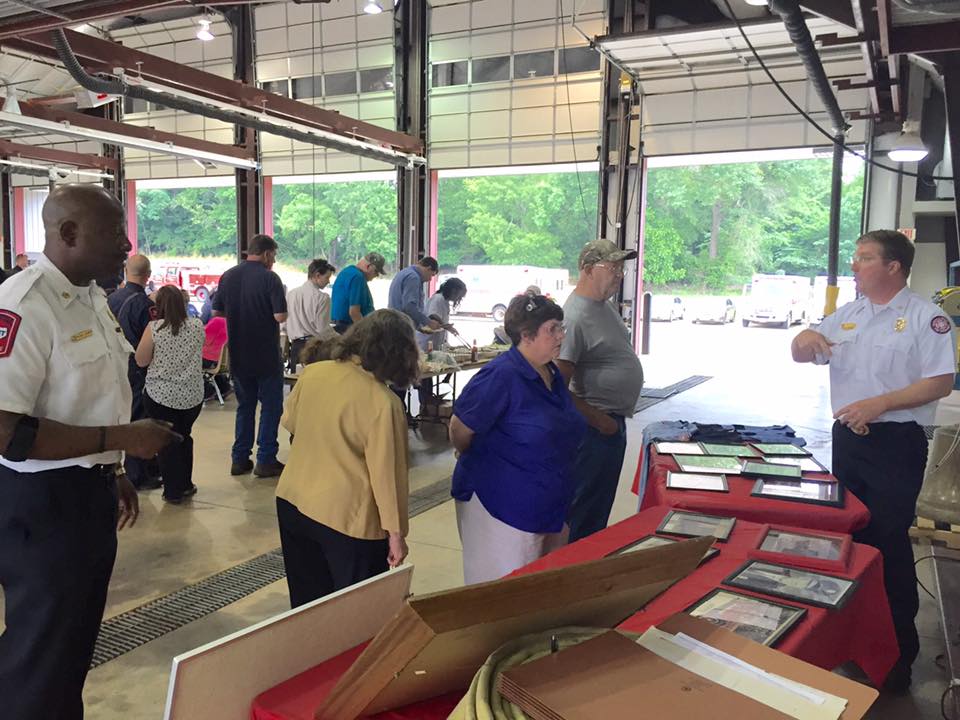 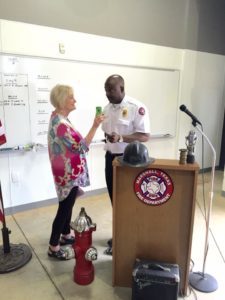 Chief Cooper was interviewed by Fran Hurley of KMHT-Radio at the event. (MFD Photos)

Marshall Fire Chief Reggie Cooper and his staff, along with the firefighters on shift  prepared lunch and presented a brief program about the fire department’s history at the event.

Joining Chief Cooper at the podium was Harrison County Constable Bill Elliott. Elliott served as the fire marshal for the city of Marshall and also was a captain with the Marshall Fire Department. He is also very well-versed in the history of the department.

Chief Cooper told the Piney Woods News later that afternoon, “It is really is exciting to be a part of such an anniversary. As much as a thrill as it is to be be able to celebrate the history of this department – a history that revolves around tradition and family, it is  exciting to think that in 50 years or more, we will be a part of that history as well.”

Cooper added, “It is very humbling.” 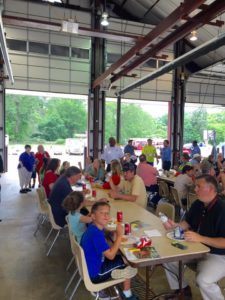 Wednesday’s lunch was held in the bay area of the MFD. (MFD Photos)

“Everything went well today, ” Assistant Chief Hudson said. “All the guys on shift did their part in cooking and making everyone feel like they were at home.”  Hudson noted that there were two families represented at the event from past fire chiefs, including the grandson of Chief Sam Lindsay. Lindsay was appointed chief in the early 1910s.

Chief Cooper wanted to thank Caddo Packing and Marshall’s Super 1 Foods store for their support of the event.

Key History for the MFD
December 1, 1871 – The Salamander Volunteer Fire Company is formed, becoming the first official fire department in the city’s history.
June 1, 1876 – The Salamander Volunteer Fire Company, the Stonewall Volunteer Fire
Company, and the Texas and Pacific Railroad Fire Company join forces to become chartered as the Fire Department of the City of Marshall.
April 1877 – The Salamander Volunteer Fire Company purchased and erected a fire bell. The bell, made by R. Register and Sons of Baltimore, MD , weighed 900 lbs and was 28 inches in diameter.
June 8, 1899 – The second brick courthouse erected in 1887-1888 was completely destroyed by fire.
1902 – Fire Station No. 2 (the original T&P Station) was built on Price Street.
May 12, 1908 – Mr. Samuel A. Griffin is chosen to serve as the Chief of the City of Marshall Fire Department.
February 20, 1911 – City ordinances that created the position of Fire Marshal, Building Inspector, and adopting a Building Code were passed by the city commission.
March 1916 – The Marshall Fire Department took possession of a 1915 American LaFrance “Type 12” automotive fire apparatus.
June 15, 1917 – Sam L. Lindsay was appointed Fire Chief and Fire Marshal. Chief Lindsay would serve the city and department until his death in 1941.
1925 – The Marshall Fire Department occupied a new central fire station located at 110 W. Houston Street.
February 1945 – Fire Station No. 4 at South Washington and Washington Place South was occupied.
1950 – Fire Station No. 3 was built at North Bolivar Street and East Avenue.
1967 – Two new sub-stations were built and occupied in February of 1968. These two stations replaced the older sub-stations and moved to reflect the growth of the city. These stations were designed to house ambulances and fire engines.
1968 – The introduction of a fire service based ambulance service was introduced in Marshall when the department took over the ambulance service from the police department. This service delivered the very basic levels of first aid and was primarily a “ride” to the hospital.
1974 – The Police and Fire Municipal Complex was built at 303 W. Burleson Street. This was the location of the Jewish Synagogue which held the former Moses Montefiore Congregation in Marshall since 1900.
September 25, 2008 – The Marshall Fire Department received a grant of $316,275 to increase the number of firefighters and support their work as first responders. The funding came through the Staffing for Adequate Fire and Emergency Response (SAFER) grant program, which helps fire departments increase their number of firefighters. Personnel changed from 14 fire fighters per shift to 15 fire fighters per shift.
October 31, 2008 – The Marshall Fire Department placed its first Compressed Air Foam System fire engine into service. The fire engine, manufactured by Ferrara Fire Apparatus, is located at Fire Station #2 on Indian Springs Road.
2010 – The new Central Fire Station was built at 601 S. Grove Street from funds provided in a much needed bond election held in November of 2006.
January 1, 2014 – The Marshall Fire Department eliminates long distance out-of-town transfers as recommended by department staff and an efficiency study. 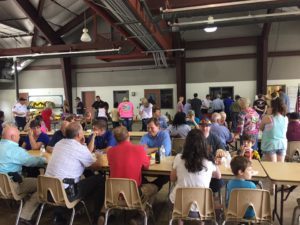 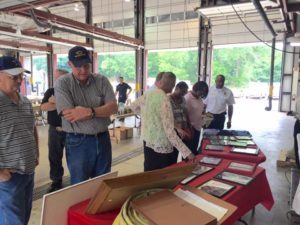 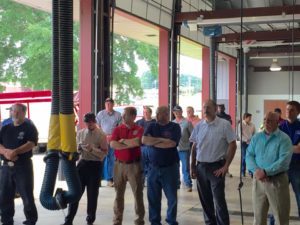